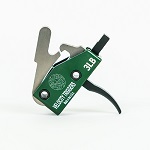 A: Not directly. Barrel length helps with velocity of the bullet. Thelonger the barrel the more velocity is built up by the expanding gassesbehind the bullet. Shorter barrels can be just as accurate as longerbarrels but the bullet will have less velocity so at longer ranges thebullet will drop faster.

Q: What are the common barrel lengths?

Q: What barrel length should I choose?

A: This depends on what the rifle is for. Shorter barrel rifles areobviously much easier to use in close quarters. But a 10.5" barrelisn't going to get the bullet moving fast enough to hit a target at 400meters very easily once you factor in bullet drop and wind. In generalI recommend at least a TRUE 16" barrel (not a 14.5" with an OAL of16"). A real 16" barrel does not require a tax stamp, which means youdon't have to deal with the BATF, you can remove your muzzle devicewhenever you want and make other modifications without all the hassle a14.5" with a pinned and welded muzzle device does. A true 16" barrelwill end up being about an inch longer than a 14.5" that is pinned andwelded. That extra inch isn't significant when it comes to closequarters (neither 14.5" or 16" is ideal for close quarters). But thatextra inch can give you an extra 100-150 feet per second of bulletvelocity that you won't get from a 14.5 with a 16" OAL because themuzzle device isn't helping with velocity. If you need a gun for trueclose quarters work (getting in and out of cars, going inside ofhouses) then go with a 10.5" or 12.5" barrel and get the tax stamp.Otherwise stick with at least a true 16" barrel which is a good allaround barrel length. If you like to do longer range shooting an 18"barrel is very good. A 18" barrel will get increased velocity over a16" and you are at the point of diminishing returns when it comes tobarrel length vs velocity.

Q: What is barrel twist?

A: The barrel twist ratio is the number of revolutions for the bulletper barrel inches. A barrel that is a 1:9” twist means that the riflingwill spin the bullet one revolution in 9 inches. A "slow" twist ratewould be a 1:12 barrel and a "fast" twist rate would be 1:7. Therifling twist stabilizes the bullet in flight. In general a slowertwist rates stabilize lighter bullets and faster twist rates stabilizeheavier bullets. Without getting into the history on bullet twist ratesin the AR-15; most barrels today come in 1:12, 1:9, 1:8 and 1:7 twistrates with 1:9 and 1:7 being the most common. The ideal twist rates andbullets are below:


The above is not a set in stone rule. You could have two 1:9 barrelsand one of them will be able to stabilize a 70gr bullet and the otherwon't. The above is just a general safe range.

Q: What is the best twist rate?

A: This depends on the kind of shooting you do and what bullets youuse. The heavier bullets perform better at longer ranges as they arenot blown off course as much by wind. Most self defense ammo is also inthe heavier weight range of 62gr-77gr. A downside is that it is thoughta faster twist rate may wear out the barrel faster. If you do smallvarmint hunting (squirrels, ect) then a slower twist rate used withsmaller weight bullets would be appropriate. For the average personthat keeps an AR-15 for some target practice and self defense a 1:9,1:8, or 1:7 barrel would be fine.

Q: What are the different Gas Length systems?

Q: What is the difference between a Chrome Moly barrel vsStainless Steel barrel?

Q: What is the difference between chrome lined vs non chromelined vs Melonite/Nitrite/QPQ?

Q: What is a Cold Hammer Forged (CHF) barrel?

A: Cold Hammer Forging is the process under which a barrel wasconstructed. It creates a stronger barrel which also costs a bit moreover cut or button rifled barrels which are much more common.

Q: Do I need to brake in my new barrel?

A: This is a topic of a lot of debate. The general accepted "standard"(if you can call it that) is that a chrome moly, chrome lined orMelonite/Nitride/QPQ barrel does not need a brake in period. Clean itonce you get it, then go shoot it. Stainless Steel barrels willsometimes come with a manufacturer suggested "brake in guide". Usuallyit involves a series of shooting a single round and cleaning the barrelthen shooting several rounds and cleaning the barrel in some sort oforder. If the barrel comes with a brake in guide its a good idea tofollow it. My personal experience is that I have never done any damageto a barrel by not doing a brake in. I have done the break in on astainless steel barrel that was suggested by the manufacturer and thatbarrel is a very accurate barrel. Had I not done the brake in I have noidea if the barrel would be any more or less accurate.

Q: What is the difference between piston systems and directimpingement?

A: A piston system does not blow all of the expanding gasses back intothe chamber like the direct impingement system does. This makescleaning the rifle quite a bit easier and means the gun runs cooler.But there is a cost. A piston system will cost at least a few hundreddollars more, and parts are not as common for it. Also a piston systemtends to create a bit more recoil which could degrade the accuracy ofthe shooters follow up shots. A piston system also weighs more in thebarrel area. Some people claim a piston is "more reliable" than directimpingement. That is only true if you are lazy when it comes tocleaning your rifle.

Q: Are guns parted together from many different manufacturersless reliable than a complete gun that comes from the same manufacturer?

A: The AR-15 platform has fairly high tolerances where all the partsneed to be the correct size otherwise they won't work together. Thegood thing is most AR-15 manufacturers built good parts that all worktogether without a problem. As long as you stick with good qualitymanufacturers parts you will not have a problem. I have guns where thelower receiver, lower parts kit, stock system and upper receiver partsare all made by different manufacturers and I never have a problem withthem.

Q: What kind of AR-15 do you recommend for self defense?

A: For a self defense rifle a 14.5 or 16" barrel either chome lined orMelonite/Nitride/QPQ with a Mid Length gas system chambered in 5.56 or.223 Wylde.

Q: What is a Flash Hider?

A: Flash Hiders are meant to suppress the flash that may come out of abarrel due to unburnt powder in the barrel. The typical A2 Flash Hiderfound on most AR-15s does a pretty good job of suppressing flash. TheA2 Flash Hider is also a compensator although its primary job is toreduce flash.

Q: What is a Compensator?

A: Compensators (AKA "comps") are meant to reduce the amount ofvertical barrel rise by forcing some of the gasses upward to keep thebarrel down. Some compensators will also reduce some flash but not aswell as a true Flash Hider. Compensators can also be a bit louder thana Flash Hider.

Q: What is a Muzzle Brake?

A: Muzzle Brakes are meant to reduce the amount of recoil that is feltby the shooter. Most of the gasses are directed out the sides of theMuzzle Brake. This can drastically reduce the recoil but usuallyresults in a large fireball which can kill your night vision at night.Muzzle Brakes are also very loud and due to the shock wave that is sentout the sides can be quite annoying to shooters next to you. MuzzleBrakes can also kick up a lot of dust when shooting from the proneposition. For these reasons Muzzle Brakes are generally only used incompetition shooting.